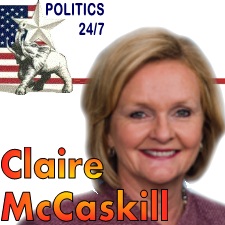 McCaskill on the Issues

While McCaskill will undoubtedly draw upon strong support from typical liberal quarters including labor and while she will benefit from a large turnout due to the presidential election, it is likely that her opponent, will benefit from an even larger turnout by conservatives and T.E.A. enthusiasts who will turn out to vote against President Obama in Missouri and who also seem to outnumber and out energize the left in Missouri these days.

Even without yet being the official Republican nominee, Sarah Steelman, an accomplished former Missouri State Treasurer, is tied with McCaskill in some polls at 50%.  This bodes quite for Republicans and while the race will certainly continue to be close, once Republicans do have a nomineee to focus on and as Election Day approaches, I anticipate a good chance for McCaskill to go down by down in defeat by about 2%.  Right now the race for the G.O.P. nomination would seem to be coming down to Sarah Steelman and John  Brunner who one White House 2012 author who lives in Missouri is said to be “gaining traction in some circles”.