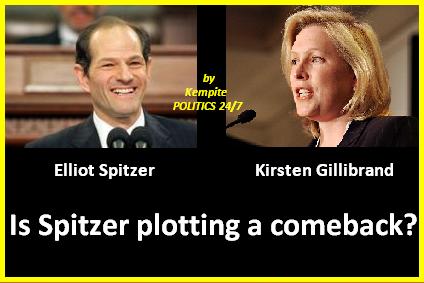 Sources state that Spitzer is looking at challenging interim U.S. Senator Kirsten Gillibrand for the Democrat’s nomination for the senate seat up in November of 2010.

Failing to decide to run for that office, Spitzer is said to also be looking at a run for New York State Comptroller.

Neither would be wise but both one or the other are not out of the question.

Even though the Governor was never found guilty or charged with the misappropriation state or campaign funds, he did break a public trust. His illegal hiring of a prostitute and failure to remain faithful to his wife do indeed tarnish the trust that a public official should have from the public that they seek to lead.

Now you can claim that Spitzer has the right ideological approach to government and policies for the people, you can, I don’t, but what you can’t say is that Eliot Spitzer can be trusted.

As a former Attorney General and then Governor who was suppose to uphold and enforce the law, Spitzer broke them and acted irresponsibly. You can claim that he was never charged as such but if you do, you must then ask why was it necessary for him to resign from office?

As for the marital infidelity aspect of this story, yes, that is a personal aspect but public officials are held up to a higher standard than most people and rightly so. So under that higher standard even though Spitzer’s extramarital extracurricular activities may indeed have been private, the fact that he broke promises and failed to fulfill his commitment to his family and wife forces anyone with a scintilla of decency to ask how we can expect him to hold to his promises to the public and his commitment to them?

Personally I do not think Spitzer will challenge an incumbent Democrat for the nomination to the job that they currently hold. Kirsten Gillibrand may be a totally inconsequential figure with little power, influence and credibility but she has not had to defend herself against cheating and illegal conduct. Spitzer could try to minimize the impact of his resignation from office and try to ride a New York wave of enthusiasm for healthscare reforms and other Obama policies but so can Kirsten Gillibrand. But on top of that, President Obama will likely be supporting both senator Schumer and Kirsten Gillibrand in the races.

Chuck Schumer’s regular six year term is up and Kirsten Gillibrand was appointed to fill the unexpired term of Hillary Clinton after she became Secretary of State until next years special election. The winner of that election fill out the rest of the original term that Clinton was elected to in 2006 and expires in 2012.

In addition to that, Spitzer would at some point in time have to answer to his poor selection of a Lieutenant Governor in David Paterson.

When Spitzer resigned, his number two man took over and proceeded to destroy what stability New York had left after Spitzer‘s brief time in office. This will inevitably be another factor to hurt Spitzer on the issue of judgment. His judgment left New York in the hands of Paterson and now New Yorker’s are looking forward to ridding them of Paterson.

All of these factors do not make a compelling case for electing Eliot Spitzer to statewide office again. Besides who really wants to send Spitzer back to Washington, D.C. where he conducted the clandestine rendezvous with prostitutes that led to his resignation from Governor in the first place.

So I do not personally believe that Spitzer would actually try to run for statewide office any time soon. But what I see as logical is rarely seen rational by liberals like Spitzer. I also know that politics is like an incurable disease that once you have, you can never get rid of. That being said, Eliot Spitzer is sick and by trying to make a comeback he is simply showing all the symptoms of someone afflicted by politicitus.