THE LAST DEBATE: Senator Government vs. Joe The Plumber’s Advocate 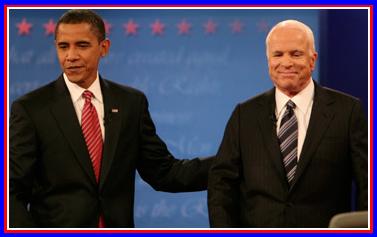 McCain and Obama In Hempstead, Long Island, NY For Their Last Debate

By far, this final debate, was the most productive of all in this season. It did not change an Obama voter into a McCain supporter or a McCain supporter into an Obama voter but it may have helped that small minority of undecided people in the electorate to inch closer to a decision and it is my opinion that many of them were swayed in McCain’s direction. Not because John McCain is a Republican but because he is not a liberal.

In this final forum two America’s were laid out. One was articulated by Senator Mcain where “Joe the plumber” lived a life of choice and opportunity that was unrestricted by government intrusion and limitation. The other was Barck Obama’s America, where Joe the plumber’s life was limited and directed by government.

This philosophical difference was perhaps best portrayed in a statement that was a slip up. A slip up that was probably the most accurate name that either side has yet called the other. It came from John McCain who accidentally referred to Barack Obama as “Senator Government”.

McCain quickly corrected himself but the Freudian slip was out and the jury, in this case, cannot be asked to disregard the statement.

Senator Obama is Senator Government. He comes to us from a philosophy that believes government should do all that people should do for themselves. Barack Obama stems from the school of thought that believes government is the answer to all things. This type of thinking is more than wrong, it is dangerous. It leads to an expansion of government that grows into an endless bureaucracy that costs more money to operate than the problem it was created to solve. It is the type of thinking which requires two government agencies, and a third for oversight, to hire three people to change one light bulb.

This thinking was consistently displayed in Senator Obama’s government solutions to such things as education and health care.

On health care Barack Obama proposed a government run bureaucracy that financially penalizes some so that government can demand to all, the type and amount of health care they can get.

John McCain offered a plan that allows government to make health care more affordable and gives you the freedom to choose the care you want. Senator McCain also addressed the need to focus on awareness and early physical education that helps people to avoid severe health conditions. Conditions such as obesity.

On education, Senator Obama rejected expanding school vouchers and increasing the chance for the natural raising of standards that comes with competition. He stated that vouchers were not a worthy effort because there weren’t enough of them. Instead he proposed a litany of government run policies that would eliminate choice and limit opportunity.

Senator McCain made it clear that that which has worked should be expanded, including school choice and vouchers. He pointed out that such a program should not be eliminated because, as Obama put it, there were not enough them. But it should be implemented by creating more of them.

Through it all, “Joe the plumber” became the quintessential embodiment of both Senators vision and the victim or benefactor of their policies..

So John McCain was right, Barack Obama is “Senator Government”.

Barack Obama is a Senator who wants government to intrude into every aspect of every American’s life. From their pockets to their education, Senator Government wants to govern it all and he wants to do it with a government that increases in size and spends more of your money.

The only other point of real note in this final face-off was John McCain’s reminder to “Senator Government” that if he “wanted to run against George Bush,” he “should have done so four years ago.” But beyond that clarification, this debate did make things a bit clearer and all the Joe the plumbers from Toledo to Texas and Seattle to Sarasota should surely know which America is the best America for them and everyone in between.

A member of the Senate, known for his hot temper and acid tongue, explodes one day in mid-session and begins to shout, “Half of this Senate is made up of cowards and corrupt politicians!”

All the other Senators plead to the angry member that he withdraw his statement, or be removed from the remainder of the session. After a long pause, the angry member accepted.
“Ok,” he said, “I withdraw what I said. Half of this Senate is NOT made up of cowards and corrupt politicians!”

This is a tale of two campaigns.  An honest tale

Obama took his family on what was an official United States “fact finding mission” to Kenya in 2006. What facts were to be found on this taxpayer funded expedition are not clear to me, but they are also unimportant when compared to the facts about the trip itself.

While in there, Barack Obama not only found facts he found a candidate that wanted his support. That candidate was his cousin, Raila Odinga, the leader of Kenya’s largest opposition party. A socialist party called the Orange Democratic Movement and Raila Odinga was the ODM’s nominee for President.

Odinga is the son of the late Jaramogi Oginga Odinga , the former Kenyan communist opposition leader. Before the end of the Cold War , he was educated in the communist nation of, what at the time, was called East Germany. He even named his eldest son after Cuba’s communist leader, Fidel Castro.

All of this gives you a clue as to where Raila Odinga’s political allegiances lie, at least it would to most people, but not to Barack Obama. No, apparently Barack didn’t know, or if he did, he didn’t care because Obama decided to go out and campaign for Odinga. This sitting United states Senator actually used the money of American taxpayers for a trip in which he campaigned for another nation’s President. Not only that but all along the way, at each and every campaign event for Odinga, Barack Obama handed out American flags with his own face imprinted on them.

If you are wondering what the big deal is, let me spell it out for you.

Barack Obama used a taxpayer funded, government sanctioned, fact funding trip to campaign for a presidential nominee in another country. Not only was that wrong, it was poor judgment, especially when you consider the fact that the candidate he campaigned for was the communist leader of a socialist party.

But it goes much deeper than that.

Ralia Odinga did not win his election. He ran a campaign that oddly enough was quite similar to the one that Obama is running now. Official ODM campaign documents, which were shared with Obama, run with the themes of change and hope, among other things.

Odinga lost by 231,728 votes. Out of about 9 million votes cast, it was a close race but a defeat nonetheless. However, Odinga did not accept the results of the election. Instead he actually called for demonstrations which led to ethnic warfare. In regards to Raila Odinga’s efforts, the group Human Rights Watch stated there is “evidence that the ODM formented post election violence” and as a result thousands were killed and more were injured and displaced.

Because of Odinga’s refusal to accept the results of the election, his tribal faction participated in an ethnic cleansing of the Kikuyu opposition and Christians who did not support Odinga.  With chants of ‘No Raila, No Peace”, a church was even overtaken and it’s inhabitants beaten and stabbed and left to burn as they set it on fire. Those who were able to flee were tracked down and killed.

The violence raged on for weeks until the duly elected President, Mwai Kibaki caved in and in an attempt to save his people, entered into a power sharing arrangement in which Kibaki kept the title of President but Odinga was named prime Minister.

Since then the conditions have been tenuous. And the two have agreed to split the selection of cabinet ministers but Odinga has been operating on his own and those actions have not been in the best of democracy. In August of 2007 Odinga signed an agreement with the National Muslim Forum.  In exchange for their support he vowed to end Kenya’s support with the U.S. in the war On Terror.

All of this begs to question why Barack Obama used taxpayer’s money in an attempt to promote Raila Odinga’s elevation to President of Kenya? How could he use a government sanctioned event to elect a communist leader to a nation that was allied with us in the War On Terror? The issue calls into question, not only his judgment, but his ethics.

There are some quarters, which I am not among, that call into question whether or not this would-be-President of the United States ’s actions for Odinga, violated the law and if he should be indicted.

The Logan Act (18 U.S.C.A. § 953 [1948]) prohibits citizens from negotiating with other nations on behalf of the United States without authorization. That being the case one, must now ask, what arrangement was made between Raila Odinga and Barack Obama?

I do not see this as meeting the legal standards of an impeachable offense that could strip Obama of his senate seat, but others do. Such a determination, in my opinion, would hinge on the fact that at the time, any arrangement that Obama made with Odinga cannot be construed as one being conducted with “the nation” (of Kenya), as explained in the Logan Act. Odigna was not President at the time. He was only running for President so I do not believe that it can be said Obama negotiated or made a deal with Kenya.

Even if my determination is correct and the Logan Act does not apply to this case, my greatest concern is Barck Obama becoming President Obama. As President, will he carry out the same kind of judgment that he did in endorsing Ralia Odigna for President of Kenya? Will Obama apologize for working to put a murderous despot like Ralia Odinga into power? And even if he did, can we trust that he will not take the side of those who enter into opposition of freedom and the United States?