What Does Glenn Beck Have And Who Does He Have It On?

“Something big is brewing over at FOX News. Glenn Beck has been foreshadowing a big story all week. Tonight he really pushed the envelope suggesting that it is so big, we won’t be talking about health care reform tomorrow. This is bold. President Obama is addressing a joint session of congress tonight on the issue of health care. For Beck to suggest it won’t even be the big topic tomorrow indicates he is sitting on a mighty big story.”

“If this flops, it will certainly be the Segway of politics this year.”

Keith Olbermann Tried To Make Fun of My Mom

The apple really doesn’t fall far from the tree and in my case I fell right next to the trunk of my parental tree.

When it comes to myself, I have a perfect mixture of both my parents in me.  I have developed a love for books that my father who literally owns a library of well over 6,000 books has. I have developed a talent for writing that both my

parents possess. Granted, my talent is not quite as good as theirs and I have not yet written any books or historical theses that have shaped events as they have, but I still have some time to catch up.

Both my parents are quite civic minded. That is another thing I have inherited. But now my father has reached a point in his life where he wants to be left alone and not bothered by the craziness of a world that he has long ago tried to change so that his son could grow up in a world better than the one he grew up in. My mother on the other hand took part in the same struggles as he and also wants to be left alone by the world but with a government that refuses to listen, her temper flares and that anger inspires a stubbornness that forces her to still continue to try and change the world. Her temper and stubbornness are other traits that I inherit from her.

In my inherited stubbornness I still struggle to eek by in the world of politics, constantly at odds with the Leadership of the Republican Party that I have an ideological adherence to, but little ideological faith in anymore. In her stubbornness however, she has no political party loyalties. My mother can’t stand nor tolerate any politician or paerty and if she had the financial wealth of a George Soros, she would pull a Ross Perot on all their asses and create a party of her own. It would probably be a party with a very patriotic but angry sounding name. Something like the American Freedom Fighters Union. As it is, her email address is GiveMeLiberty.  Mine is LiberalsRlosers.  As I said….the apple doesn’t fall far from the tree.

Recently her stubbornness has forced her to become a Tea Party Patriot. Between the outrageous antics of New Jersey state government and the audacity of dope we have in the White House, she has been driven to a point of total impatience. And so she has picked up arms in the form of a cyber trigger that she pulls constantly as she organizes a New Jersey Tea Party group. She has been attending and coordinating protests against Governor Jon Corzine and trying to wake people up to the fact that the citizens of freedom’s greatest nation are losing there freedoms.

In the midst of all this, one day while setting her DVR to record the television programs that she did not want to miss, she noticed something funny about the way The Glenn Beck Show appeared written out on the screens programming schedule. Now I am not a fan of Glenn Beck. I have nothing against him but for as dramatic as I can often be, I find him overly dramatic. Still I find that there is little that he states which can be disputed from a constitutional perspective, the only perspective that a federal government should have and my mother is an admirer of Glenn Beck.   She appreciates the level of anger that the points he brings up elevate her temper to.

So while my mother was setting up the DVR, she took a closer look at the screen and there it was, as clear as crystal….. GlenIf”ck.

While all other programs appeared with their proper names and spelling, this one conservative oriented program was turned into a curse word. After a moment of taking this in, she became offended and then angered by this abnormality that was unique to only this show.

As time progressed so did her anger. What was this all about? Whose idea of joke was this? All these thoughts crossed her mind and as each one passed her anger was raised.

She contacted CableVisiont, her cable provider. They had no explanation. She contacted the FCC. No answer was provided as to the reason or cause for the curse word identifying the Glenn Beck Show. So she pulled out her digital camera and recorded this event so as to prove that she was not seeing things.

My mother began forwarding the details of this mysterious but ominous situation to media outlets. Some newspapers started making calls and reporting back that neither FCC or Cablevision had an answer. In fact officials at CableVision went on record as saying “no comment”.

One New Jersey radio station picked up on this suspicious circumstance and discussed it. Others continued to try to get details about it.

Then on Friday night, the looniest of liberal loons, the master of liberal propaganda and talentless hack who couldn’t make it as sportscaster, Keith Olbermann, picked up the story. He ended his pitiful display of liberal lies and devastatingly low rated excuse for a television show with the video my mother made which showed how the Glenn Beck Show appears on her television.

First, the fact that the Glenn Beck Show is the only program that shows up this way is not a theory or even considered a conspiratorial effort by liberals. The plausible assumption here is that someone is demonstrating their own liberal biases and tampering with the programs name and the reasonable request here is to have such shenanigans stopped.

Second, if anyone wants to point fingers at extremists who exaggerate claims, Keith Dopermann should take at look at the party he pledges allegiance to and ask Hillary Clinton about that vast rightwing conspiracy that she blamed on the nation while her husband was lying to the world.

Thirdly and probably most importantly. Don’t make fun of a mans mother.

As I already stated, I have inherited my mother’s temper and Keith “Low Rated” Olbermann has already gotten on my bad side once before. Last time he offended me, I took him on and was invited to discuss him on a Los Angeles radio show.

So I offer this to Keith;

I don’t make fun of your mother, so do not make fun of mine. Your mother may have raised a spineless, fool with more mouth than brains but mine didn’t.

And may I also suggest that while your program ,which borders on being cancelled, continues to lose traction because of the gibberish that you air, stop for a minute and take a look at yourself and the ideology you promote. Look at your ratings and the few dredges of the earth who program their televisions to see your pathetic program. Check out the Van Jonses and Nancy Pelosis, Barney Franks, Rod Blagojeviches, Dennis Kuciniches and William Jeffersons of your ideology and tell me how serious that party can be taken.

Then I want you to please name for me any of the Democrat Party’s greatest achievements in the last forty years. I’ll be waiting for your script writers to try and dig up any significant accomplishments. The answer to that question would leave lots of dead air on your show if you had to answer that question live, on television.

In the meantime remember this, don’t make fun of people’s mothers. Especially the mothers of Italian sons from Brooklyn who have tempers.

Glenn Beck Show Identified By The Use Of Curse Words On T.V. Screens

So there have been claims that the entertainment industry and the media have a liberal bias. The claim is nothing new. It is a charge that has existed for decades and one look at Hollywood, cable or network news or a newspaper and you can understand what has led to this allegation. 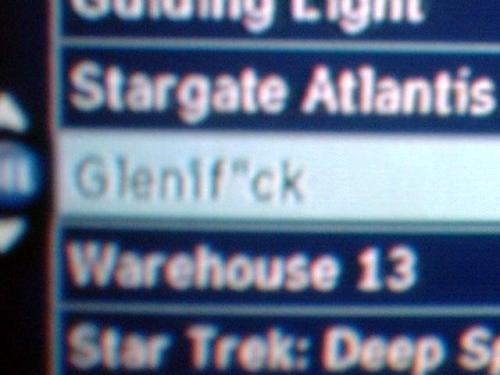 Once esteemed news outlets such as The Grey Lady of New York, The New York Times has only helped to perpetuate claims of bias. Their recent history is strewn with examples of political favoritism rearing its ugly head in the form of editorialized news stories that deliver more opinion than fact.

But recently a most unorthodox display of bias played itself out on the most unlikely places.

Subscribers to Optimum, a cable television and internet service provider received a little surprise when going through their channel lineup or adjusting their DVR settings.

There among other programs during the same 5:00 pm time slot was the show Glenn Beck. But while other shows like StarGate or Star Trek or the Guiding Light were indicated by their correct spellings and names, the Glenn Beck Show was displayed as “ Glenif*ck “.

Could this be a glitch of some sort? Well maybe but it has to be a pretty selective and stealthy one and it would be a very coincidental one. As of late, Glenn Beck has caught on as one of the largest antagonists of the left to come down the pike since Sean Hanitty went national.

Beck’s defiant demeanor stems from a libertarian, not Republican, streak that infiltrates every school of thought that he present to his viewers and listeners. He has a tendency to throw a monkey wrench into policies that detract from the principles which founded our nation. He uses a rarely referred to document these days, the U.S. Constitution, to point out the problems with contemporary governance in America.

This frustrates many Obama fans and loyalists who disdain any comparisons between President Obama’s liberal socialist policies and actual socialism. So much so that when Glenn Beck became a hit and unattracted an unprecedented number of viewers for his time slot, the liberal media organized itself into a full court press attack on him. At one in April, when Beck’s popularity was first confirmed on the radar, liberal newspapers ran hit pieces on him for weeks.

This was a stark contrast to Lefty media critics who gushed about MSNBC’s boldness at giving a liberal lesbian in Rachel Maddow her own show. For he shallow interviews and lame attempts of humor, the public endured numerous stories of praise in periodicals.

It is clear that while Glenn Beck’s message is being widely received among a general population that is offended by the Gestapo style policies and tactics of the current ruling regime in Washington, the liberal elites have been offended and angered. But despite their disgust with the views expressed by Glenn Beck, none of them can effectively dispute his constitution based opinions and interpretations.

So one must question the legitimacy of his popular program being listed as Glenif*ck.

Will this be explained? Will the doubts about how Glenn Beck got translated into Glenif*ck even be addressed?

A skeptical community of Americans await an answer or at the very least an explanation. Inquiries in to the FCC and Optimum on this incident have yet to be answered but if they are, I’ll be sure to let you know what it may be. I won’t hold my breath waiting for an explanation though.