Stars of The Reality TV Stage Take To The Political Stage

As New Jersey enters the remaining months of it’s gubernatorial election, the last most intriguing question that remains is whom will the Republican and Democrat candidates choose to 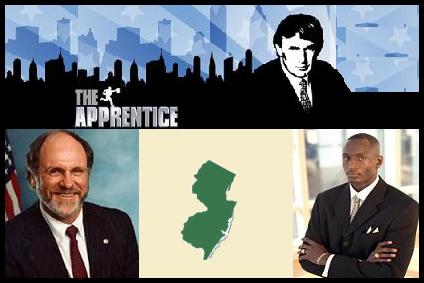 be their running mate for Lieutenant Governor.

It is the first time that New Jersey will ever have such a post, a post that over the last decade or more has proven to be quite a necessity. The need became aparent after a series of events rotated the office of Governor like a political carousel that went around and around and got us nowhere.

It started in the late 90’s when Governor Christine Todd Whitman failed to complete her second term in office after resigning to become Director of the Environmental Protection Agency.

In accordance with state law, the New Jersey State Senate President assumes the responsibilities of the Governor in the event of a vacancy or incapacity or even whenever the duly elected Governor leaves the state.

When Whitman resigned the Senate President, Donald DiFrancesco, took over. But his term as Senate President ended one week before his successor, Jim McGreevey, was to be sworn in as Governor. That created a unique set of circumstances. The Senate was evenly split between Democrats and Republicans. This gave the leaders of each party the right to claim the title and the job of acting governor. So they agreed to split the job for the week before the new Governor took office.

Republican leader John Bennett first took charge, then Democratic leader Richard Codey. A fifth governor was state Attorney General John J. Farmer, Jr. who got the job Tuesday afternoon for the hour or so that it took to swear in the new Senate president.

Following that tangled web, Governor Jim McGreevey resigned more than a year before his term was up due to the fact, that as he put it, he was “a gay American”. Being gay was not why he had to resign of course, but the shock value of the admission helped to cover up the real reasons which were a clandestine gay affair that he was conducting behind his wife’s back and the subsequent patronage scandal involving his gay lover and a host of other financial improprieties that the Governor was engaging in.

This yet again unique set of circumstances allowed Democrat Senate Presidentr Dick Codey to again become Governor. So for more than a year New Jersey had a Governor who was also the Senate President. Along the way many realized that by having one person in charge of two branches of the legislature kind of defeated the checks and balances of the state legislature. Was Dick Codey going to push for one set of crappy legislative initiatives as Governor and then rally the state senate together to vote against those initiatives as the Senate President? Obviously not and so this consolidation of power was a concern.

So after time New Jerseyans passed a referendum that created the office of Lieutenant Governor. But after filling the post of Governor when McGreevey resigned, Codey again had to step in when Jon Corzine was elected Governor.

As Corzine had his driver speed down the Garden State Parkway at 90 miles per hour, he cascaded off the road and EMS workers found the new Governors legs dangling out of the window of the state SUV that he used as it rested in the shrubbery along side of the highway.

Corzine was incapacitated for months as surgery after surgery repaired the many broken bones that he received for speeding and not wearing his seat belt.

So here we are today. Jon Corzine has been re-nominated for Governor and now he has the opportunity to select a Lieutenant Governor if once again he cannot fullfill his duties as Governor.

On his own, Corzine faces an uphill battle .

After first coming to Trenton, in just six short months he increased taxes in New Jersey by almost $2 billion dollars. This happened after he ran for Governor promising to “control spending”. Now as reelection approaches the state has a budget deficit slightly larger than the total amount of revenue he raised in tax increases when he first took office. This is just one dismal spot on a very spotty and tarnished record.

After questionable negotiations with state unions that were headed up by the Governors girlfriend, Carla Katz, state budget negotiations that closed state government for the fourth of July in his first term, a plan to increase tolls on roadways every year for decades to come and a push for putting tolls on roads that don’t have any tolls, Governor Corzine has accomplished little more than make life in New Jersey tougher and more expensive. In fact the most significant legislative achievement of his administration to date was the abolishment of the death penalty in New Jersey.

This dismal record puts Corzine’s reelection in a desperate position.

Polls have the Governor behind his Republican opponent by as much as 8 to 10 %. So what is a desperate candidate to do?

Well first thing the Governor is attempting to do is take the focus off of him and put it on President Barack Obama.

After winning the Democrat nomination in June, Corzine’s victory speech evoked the name of the still popular President dozens of times and in talking about his Republican opponent, Chris Christie, the former U.S. Attorney for New Jersey, he evoked the name of Georg Bush and even one of Christie’s former bosses, Attorney General John Ashcroft.

I guess with little to go on, the only hope Corzine has is to latch on to the popularity that Barack Obama has in New Jersey and try to paint a picture that makes him an Obama surrogate and Christie a Bush surrogate. But the problem is George Bush and Barack Obama are not on the ballot in November of ‘09. He and Chrsitie are.

So Corzine is now apparently considering using the newly created Lieutenant Governor spot on his ticket as a means to tag a name and face that might help his chances more than his own name.

It is said that Randall Pinkett may be Corzine’s running mate.

Who is Randall Pinkett?

He is an African-American reality TV star with degrees from MIT, Oxford University and Rutgers University and CEO of a successful technology consulting firm in Newark. He was the winner of Donald Trump’s hit reality television show The Apprentice.

Personally I cannot believe the speculation that has Corzine selecting Pinkett as his running mate. I can’t see how a sitting Governor would find a reality TV star to be the most qualified person to run the state in his place. But it is clear that Corzine needs lots of help to win in November. So Pinket might just be the choice he thinks he needs.

First of all we know that Governor Corzine has courted and desperately hoped that Newark Mayor Cory Booker would be his running mate.

Booker is a popular first term Mayor of New Jersey’s largest city. He is young, articulate, energetic and political savvy. He is also African-American and Corzine hopes to tap into an unusually heavy turnout of pro-Democrat, Obama supporting African-Americans.

But alas, Booker rejected latching his rising star to the falling meteor that is Corzine‘s.

Other prominent African-American mayors do exist and Corzine has toyed with the idea of naming one of them but none of them have the same statewide identification that Booker has.

There are some women he is considering but few of them have very significant regional appeal and none of them have any statewide appeal. So that leaves Corzine with an African-American who has been seen by millions on a reality TV show.

By this standard why not select the buxom beauty from MTV’s reality show, “I Love New York”. The so named “New York” of that show had extremely high ratings and tens of millions of young voters watched her bounce from room to room with prospective male partners as she determined who was her best looking and most compatible love interest. New York is both a woman and African-American so she is a twofer for Corzine, whereas Randal Pinket only adds color, not gender, to his appeal.

Apparently the name of the game for Corzine is simply winning reelection. I mean why choose a running mate based on experience, expertise, ability or public service accomplishments?

With little to run on Jon Corzine is hoping that snowballs don’t melt in hell. As such he has begun to run one of the most negative and shallow campaigns in history. Instead of pointing to any achievements, he tries to morph his Republican opponent into George Bush.

Without any ability to demonstrate how Corzine has improved life in New Jersey, he evokes the name of Barack Obama in the hopes of morphing himself into the popular President.

In the mean time New Jerseyans suffer from the highest tax burden in the nation and due to a business environment that Corzine has decimated with taxes, fees and regulations, the state has one of the highest unemployment rates in the nation.

Yet with no relief in sight, Corzine sticks to his reelection plan. Today he will appear at the PNC Arts Center in Holmdel, New Jersey with none other than the President and when the President flies off, it looks like Corzine is hoping to tap into victory by adding another African-American with little experience to his ticket.