Socialism For Sale On Ebay. How Much Is It Worth?

As President Obama tries to sell an overhaul of health management and care that is tantamount to medical socialism, liberals have breathed new life into the failed ideology of socialism.

Between President Obama and one of the most liberal congressional delegations in decades under the leadership of Harry “We Lost The War” Reid and Nancy Pelosi, the San Francisco treat, everything is fair game for Democrats to socialize. They have moved to tax the air we breathe and have adopted measures that will amount to the greatest transfer of wealth ever known to man. Eleven months after Joe the Plumber’s question prompted then Senator Barack Obama to offer the now infamous statement quoting him as hoping to be able to “spread the wealth”, his wishes are coming true.

Like children in a candy store, the unchecked liberal led federal government are rapidly rushing to put government in charge of everything including the money that once flowed through a merit based free market economy. Under President Obama, Majority Leader Reid and Speaker Pelosi, the government is God and it, not the free market controls who is or isn’t wealthy, when and where people receive medical attention, what cars we drive, what industries survive and how much a farmer can be charged for the gassy emissions of his cows.

Without realizing it, gleeful liberals and ignorant Democrats who are blissful over the election of President Obama and the liberal led Congress are seeing the socialism that our nation once fought, now spread from border to border and sea to shining sea.

Like pet rocks and marshmallow heeled shoes, socialism id the in thing. It is the trend du jour and once shy supporters of this anti-American system of governance have come out from under the rocks they occupy to celebrate and rejoice in the socialist system that will eventually run out of the peoples money that they spend for us.

The rise of socialism shows itself in likely and unlikely places. One likely place is on that Mecca of free speech and thinking, the internet.

On one internet web site, U4Prez.com, socialism has reached an all time peak of support among its field of candidates who run a virtual race for President. U4Prez is a social network for politics. It is largely a site for political debate and through several creative platforms, U4Prez allows participants to make their point on any and every issue under the sun. Those who participate in the site are called candidates and through a system of weekly primaries and a rating system that allows “candidates” to register their levels of support for other “candidates”, a virtual campaign for President is waged. Come November the winners of the Independent, Republican and Democrat primaries run against each other for the presidency.

Along the way, candidates even select party leaders. After President was sworn into office U4Prez saw some candidates organize a U4prez Socialist Party. Membership in that party did not exactly swell but it did get support and its few members were persistent and vehement in their promotion of socialist values and policies.

But recently the leader of the U4Prez party snapped and resigned, leaving socialists on the site rudderless. In a statement issued by the U4Prez Socialist Party leader, he articulated his frustration with trying to get through to Republicans and conservatives who are offended by socialism and consistently denounce the antithetical role that it plays in reference to our Constitution and American life in general. 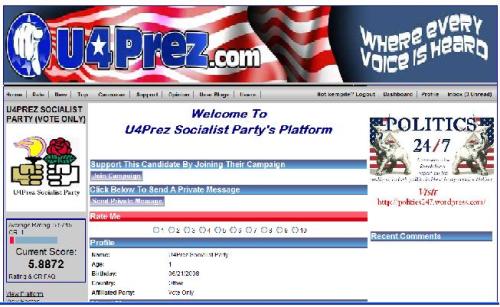 The socialist leader’s abrupt departure created a vacancy but as true believers in the free market, one member, Kempite, (yours truly), placed the U4prez Socialist Party up for auction on eBay.

In what is a demonstration of the ingenuity of capitalism, socialism was finally given a purpose and value. But in another demonstration of how good citizenry doesn’t put personal profit over individual compassion which need not be legislated by government, any profit from the auction is going to a subsidiary of the Humane Society called Popcorn Park Zoo, a rehabilitation and natural habitat facility in New Jersey.

In another very symbolic gesture, the current high bid for socialism is, one cent, an indication of the fact that socialism is really not worth anything more than one red cent.

Now more than ever, political passions run deep in America. After a summer of town hall events marked by a wide divide of different opinions, political debate rages and it does so nowhere more than on U4pPrez.com.

Get involved. Add your two cents to the process. Visit U4Prez.com, become a candidate, join the discussion and run for President. You just might be better than the current occupant of the White House.

RUN YOUR OWN CAMPAIGN FOR PRESIDENT ON U4PREZ

As indicated by the name of this blog, politics is the name of the game. It is what we discuss here. It is nothing but POLITICS, 24 hours a day, 7 days a week. But every now and then the reality of politics can become a bit frustrating. At such times, where does a political fanatic turn for relief?

Well ladies and gentlemen a respite from real politics can be found in fantasy politics at u4prez.com.

Now I have to tell you that active participation on u4prez does not come without frustrations of its own.

In fact sometimes it can be even more frustrating than real politics.

The premise of the site is to afford you the opportunity to run your virtual reality campaign for President of the United States and in many ways it is similar to the real thing.

To begin you simply sign up by registering in a simple process that has you pick a user I.D. and password.

I selected my user I.D by using the name of my political mentor, Jack Kemp. So I am, Kempite.

The site is free and after you have selected your own creative online user ID, you can take your time in selecting an image to use as your avatar and in crafting your political platform. Here you can create your favorite sound bite and list your favorite and least favorite Presidents as well as declare your party affiliation. My platform can be viewed, here.

The rest of your platform can be used to articulate your positions on the issues. This platform becomes your homepage of sorts and it gives people an idea as to where you stand and where you are coming from.

Once you have established your online political persona, you have to jump right in to debate. You will find debates taking place everywhere on the site. It is up to you to interject yourself into the topics and discussions that you wish to have a say in.

There are other ways to start debate on the site though such as a special section for press releases which automatically go out to your supporters.

Another forum for debate can be started by creating a caucus.

Through caucuses you can maintain an ongoing discussion on any particular issue or cause that you wish.

You can also find some more general debate by viewing the comments on individual profiles and now debate has been expanded with the introduction of a user blog section.

Here you can post a blog story and readers take it from there as they leave commentary that shreds apart the points that you try to make clear.

Candidates can be rated on a scale of 1 to 10 every twenty four hours. The more people like you and agree with you, the more they will extend a high rating to you. In fact owners of the site encourage members to rate one another and they encourage reviewing the platforms of fellow candidates and leaving your own commentary about them.

The logistics sound simple enough. It is not much different than running for real elected office. Get out there and try to get people to support your point of view. But the simple logistics often get complicated because of human nature and the inherent American instinct for accountability.

After awhile, the site can get personal. The level of faith that individuals involved in u4prez bring to the table is striking and they take their political beliefs to heart. For some, a challenge to their thinking is a direct blow to their hearts and they lash out.

Others view the political discourse as a challenge.

For my part, u4prez has been a terrific launching pad for ideas. As an early participant, I created the first caucus on the site and eventually I created one of the most intense and longest u4prez debates on u4prez. It involved illegal immigration and a proposal that I called Open Arms-Secure Borders.

For months the left and right of u4prez discussed every aspect of the immigration issue from amnesty to deportation to the construction of a border barrier to an open border policy. You name it, it was brought up and debated.

Probably the greatest challenge on u4prez is the same that faces any real candidate for President. How do you vehemently disagree with someone, yet still earn enough support to get elected.

That challenge has led to a great deal of creativity on u4prez and it has also led to some intense battles between candidates.

In the end, u4prez.com provides political fanatics with an forum that allows them to be heard and much like real politics, some people don’t want hear it. But just like politics, you have to find a way to make your opinion appealing and a way to overcome the apprehensions of am apprehensive electorate.

Although u4prez may not be the real thing, it does provide a real sense of just how difficult it is to reach a trustworthy consensus in America today.

Occasionally u4prez runs contests. In the past I have won their video contests where u4prez partnered up with you tube and asked candidates to produce a video ad for their campaign.

For that last contest, I produced the piece below. It highlighted the legislative initiatives that I crusaded for on u4prez.

Currently u4prez is running another contest. It is, a blog contest that offers the winning blogs cash prizes ranging from one thousand dollars for first place to 100 dollars for third place.

All in all, u4prez is a fun and creative experience in American democracy that promotes a constructive flow of ideas and sparks a rousing debate that gets the creative juices flowing while teaching you that sincere participation in politics is not as easy as it looks.

Try it out for yourself. Tell ‘em POLITICS 24/7 sent you and after registering, join my campaign, Kempite , and lets put forth the virtual reality agenda that we hope to advance in the real world.