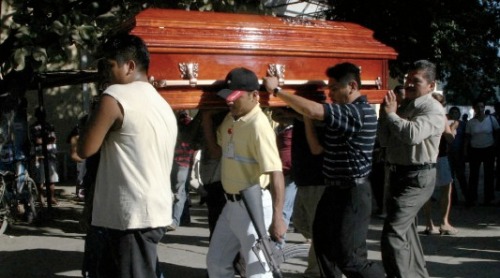 Members of the police carry a coffin of one of their own. Seven police employees were killed in the same incident that took this fallen officers life

In Mexico, 5,376 Mexican federal agents, police and civilians who were killed  by drug traders during the same time period.

So it can be safely said that nearly as many Mexicans died as a result of drug terrorists as did Iraqi’s from the terrorism in their war torn nation.

All of us are aware of the threats posed by terrorism. 9/11 brought that fact home and since the events of September 11, 2001, America has been on guard and on the offense in that War On Terror. Since that dreadful day and our somewhat official declaration of War on Terror, not a single attack has again taken place on American soil.

That is quite a contrast from the record that we accumulated in the decades since we declared the War On Drugs.

The term “war on drugs’ was first used by President Richard Nixon in 1971. At the time it was a play on the well known “War On Poverty” penned by the administration of President Lyndon B. Johnson in the mid 60’s. The technical aspects of the War On Drugs have varied over time but it’s basic strategy has remained the same……. employ the cooperation of other nations to eliminate the illegal drug trade and eliminate the selling and use of illegal drugs through an aggressive zero tolerance, law enforcement agenda and a persistent and wide spread anti-drug education program and campaign.

To some degree, it has helped but the amount of time and money spent on the effort has produced results that are less than stellar. The rate of success in the War On Drugs certainly would not be considered acceptable in the War On Terror and yet as far apart as the results of the two are from each other, they are about to become one in the same.

Iraq is 6,005 miles away from the shores of the Unites States off of New York. That is a long distance yet we know that distance, although it may not make things easier, it still does not prevent terrorist attacks from taking place here. Mexico isn’t even inches away though. So terrorism through Mexico is even easier. They are connected to us, and not just physically. They are connected to us by direct and immediate contact through trade health, agriculture and citizens, legal and illegal. But perhaps the greatest connection between the United States and Mexico is drugs.

It is a deadly connection. One that dulls the minds of millions, endangers the lives of hundreds of thousands and kills tens of thousands each year. 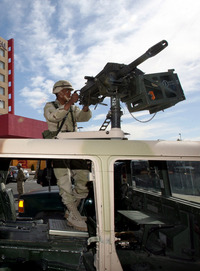 A soldier stands guard in front of the Camino Real Hotel in Ciudad Juarez, Mexico.

Drugs are probably the most prolific and profitable commodity exchanged across the U.S.-Mexican border, yet, despite the negative effects, it’s illegality and the “war” on them, drugs flow form South to North with the ease of the Shenandoah River in the Virginias.

The incredibly violent rate of drug deaths in Mexico during 2008 is a loud warning bell. It rings with more dire warning than the bellowing horns of the Titanic as it went down after the iceberg tore a lethal hole into it’s hull.

The incredible number of deaths occurred as a result of the increased boldness of drug cartels and gangs. They have taken a stand and made it clear that they are defiant and will not allow any government to infringe on their livelihoods.

In 2008, an increasing amount of drug lords have made incursions in the United States. One of the most recent well publicized events brought about an Amber Alert after the grandson of a man with shady loan debts to drug dealers kidnapped his grandson. The boy turned up in Las Vegas, but the drug dealer’s message was clear.

However, I must ask, what will it take for the drug issue to be truly taken seriously in the United States? Would  it have made a difference if that little California boy was found with his throat slashed? How many more incidents will it take before we realize that terrorism is about to get a partner. A partner that, like Palestinians in Gaza firing missiles into Israel, will be lobbing more violence into America.

America must wake up.

While there are those so far on the left and so far to the right that they meet together in the ideological circle and both try to legalize illegal drug use, an explosion of death and violence that we have not seen before is about to unleash itself.

I am well aware that drug violence is nothing new, but the extent to which it is escalating is new and yet we sit idly by as though things are not different. We almost accept it as commonplace.

Do you know how ingrained the dug culture has become in our southern neighbor?

Narcocorrido is a form of music based on a type of Mexican folk music called corrido. It sounds like a Latin polka and goes way back in time. It was used to celebrate revolutionary figures and heroes like Emiliano Zapata and Pancho Villa. The new version is called narcocorrido and it sings the praises of drug traffickers and drug related bandits. One older narcocorrido sings about Camelia the Texan, and her boyfriend who go to Los Angeles with a load of marijuana in their car’s tires. They sell it and Camelia’s boyfriend dumps her, saying, “Here’s your half, now I’m going up to San Francisco to my true love.” The song goes on to sing about how Camelia pulls out a gun and pumps him full of lead.

It concludes with the line……… “All the police found was the fired pistol; of the money and Camelia, nothing more was ever known.”

Not that the little ditty is astonishing. Here in America, with the likes of P. Diddy, 50 Cent, Snoop Dog, and others, the lyrics of that narcocorrido could be considered tame by American standards. Then again, standards are the problem. Just as narcocorrido is easing into mainstream Mexico, acceptance of drugs and drug violence has been easing into American culture.

That is not to say that we think violence or drug violence is good, but our tolerance of it has increased as our

intolerance of drugs has leveled off.

For example, I can recall a recall a comments board for a local newspaper in New Jersey called the Asbury Park Press. In it was a story about underage teens arrested for drinking and serving alcohol at a party that they held in their home while their parents were away. More than 60 percent of the comments were of the “let them be” impression. Some said “kids will be kids” and others said “the police should be doing more important things than enforcing underage drinking laws”.

I am not suggesting to bring back prohibition of alcohol but I am merely pointing out the permissiveness that is increasing in society. People are actually suggesting that kids should be let off the hook for breaking laws.

My point is,  just as it took 9/11 to finally deal with terrorism effectively, what will it take for us to deal with drugs and the drug trade effectively?

I for one feel that some of the intentions of the “War On Drugs” must be dealt with by using the same sense of conviction that 9/11 created, especially when it comes to the drug wars goal of employing the cooperation of other nations to eliminate the illegal drug trade.

But more than that, I believe it would be encouraging if we at least secured our border with Mexico. In fact I believe that is, first and foremost our nations top priority.

YES!, our most important priority. More so than even the economy.

Without a secure border there will be no economy to handle.

At a later date, I will detail a proposal of my own that I have previously released. It is called Open Arms-Secure Borders. It is a comprehensive immigration reform proposal that welcomes legal immigration but defends the sovereignty of our nation and respects and secures our borders.

For now though, Americans must at least acknowledge the fact that the iceberg is in sight and that the U.S.S. Freedom & Prosperity better start steering in another direction or like the Titanic, we will tear apart our hull of security.

During what can, at the very least, only be considered tough economic times, Congress is looked at for acting responsibly and demonstrating some fiscal responsibility.

Yet despite these facts, Congress goes ahead and accepts an automatic pay raise.

Doing so is reminiscent of the captain of the Titanic demanding that iceberg lettuce be served with dinner the night the great vessel went down.

Pass The Link On To Family, Friends and Co-workers