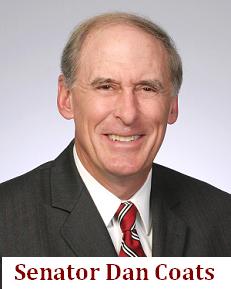 Following up on our recent assessment of the Senate races taking place in the 2010 midterm elections, today POLITICS 24/7 moves Indiana into the possible Republican pickup column.

Despite his attempts to sound conservative, Evan Bayh has a lot to answer for and although he is usually on solid ground, Bayh was standing on a bed of shifting sand in this anti-Democrat, anti-incumbent environment.  However; Bayh is well established and has a history of convincing people that he is much more conservative than his voting record shows. So we saw his reelection as tougher than usual but safe.

Senator Dan Coats has entered the race, and now that he has, with his favorable and reputable record make him a real threat to Evan Bayh as Americans sour on Bayh’s liberal party affiliation and support for some major liberal initiatives.

So In addition to New York, Washington, and Wisconsin being possible pickups for the G.O.P., POLITIICS 24/7 now adds Indiana to the list. 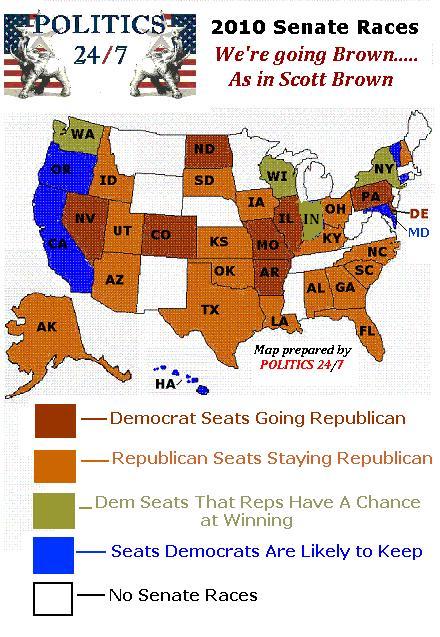 These increasingly competitive seats are just icing on the cake that so far has Republicans beating Democrats in Arkansas, Colorado, Delaware, Illinois, Missouri, Nevada, North Dakota, and Pennsylvania. That’s eight seats. If Republicans can pick up one of the four possible pick up seats, that would give the G.O.P. fifty seats to the Democrats seats. That would allow Vice President Joe Biden to cast the deciding vote. If they can win two of the four pickup seats that would give Republicans 51 seats and majority control, making Joew Biden as inconsequential as he really is.

For a full analysis of the 2010 senate election map and the other races, see; 2010 Senate Races Are Turning The Map “Brown”

After Massachusetts went Brown for Scott Brown, POLITICS 24/7 recently noted that if the G.O.P. can convince voters that they have learned a lesson and truly understand that Americans are looking for a limited, constitutionally driven government, that minds its own business and focuses on that which it is suppose to, such as our national defense and sovereignty, they are on schedule to pick up a minimum of 27 House seats and 7 Senate seats.

If Republicans can not only convince voters that they learned their lesson but also go a step further and organize themselves around a unified message, I also pointed out that they can actually pick up as many 9 or 10 Senate seats and 41 House seats to achieve a 218 to 217 seat majority and a 50/50 split or 51/49 majority in the Senate.

Over the past few days, as seen in the map below, the odds of the high end of these predictions rather than the low end, have increased greatly, especially in the Senate, where some seemingly safe Democrat seats are leaning more toward the toss up column. 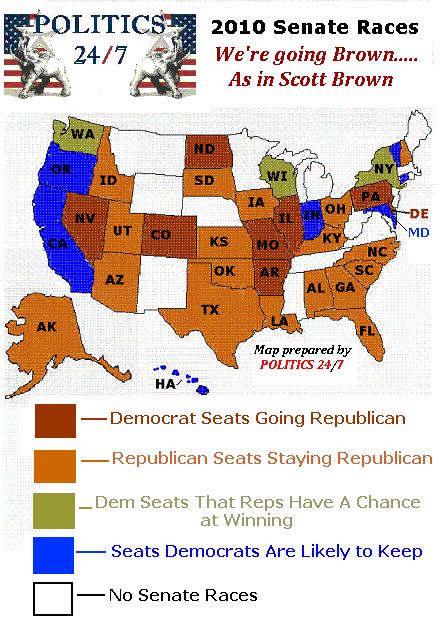 In Colorado, the Centennial State, Democrat Michael Bennet, whose election is already in doubt, is looking to be in even more doubt. Bennet, was appointed by the state’s unpopular Governor, to fill Republican Ken Salazar’s seat after President Obama appointed Salazar to his Cabinet as Interior Secretary. Now it is looking like Senator Bennet’s shaky bid to a full term in the Senate will be further damaged by a challenge for the Democrat nomination from Andrew Romanoff who has just signed some high priced and reputable Democrat consultants and pollsters to his primary campaign. This will undoubtedly make it even more difficult for Democrats to compete in an environment that is becoming less and less friendly for them in Colorado as each day passes.

A quick fly over to the East and a look at Deleware reveals that since the son of the favorite son of the Diamond State, Joe Biden, is not going to seek his fathers old Senate seat, Republican Congressman Mike Castle has this one almost in the bag. Considering the lousy environment for Democrats this time around, Beau Biden is conceding that race to Castle and running for reelection as the state’s Attorney General.

From the Diamond State in the East, we head back to the West and the Silver State, where another political gem reveals itself for Republicans.

Democrat Senate Majority Leader Harry Reid’s poll numbers have him plummeting to earth in a death spiral that has gravity hurtling him to the ground faster than Martha Coakley in a race against Scott Brown, and unlike Coakley, who Reid’s Republican opponent will be, is not even official yet.

According to financial filings released this past Friday, the Democrat leader turned out his weakest fundraising quarter of the entire past year. Not a good sign for a campaign that is trying get his reelection bid off the ground. In addition to that, approval ratings in the low 30’s are not a good sign of Reid’s ability to bring in a hell of a lot more money for what is looking like a doomed reelection bid.

While we’re here in the West, Washington State is worth looking at. Here we find that once safe Democrat Senator Patty Murray’s sneakers are beginning to wear thin on the voters of the Evergreen State. Here, a new poll shows that three term incumbent Patty Murray pulls 42% against two time Republican Gubernatorial candidate Dino Rossi who polls 45% in a Murray-Rossi match-up.

But the fault line that lies in the Democrats base does not end there. From The Evergreen State, it meanders eastward to the Badger State where the confident and once secure liberal lion cub, Russ Foolsgold, I mean Feingold, now finds himself at risk if former Governor Tommy Thompson runs against him. If Thompson does decide to go for it, something which he is seriously mulling over, Thompson would take 47% to Feingold’s 43%.

But the more you travel this great land of ours, the worse the news gets for Democrats.

As is the case south of Wisconsin, in Missouri where voters in the Show Me State seem to want to see something more than the Carnahan dynasty represent them. Robin Carnahan, the Secretary of State and daughter of the former Governor Mel Carnahan is looking to run for the seat that her father ran for and won, even though he was killed in a plane crash only days before the election. Governor Carnahan’s posthumous victory allowed the Lieutenant Governor that succeeded Mel upon his death, to appoint Mel’s wife…..Robin’s mother. But since then Mama Carnahan lost that seat in a special election and now Robin is seeking to get back the seat that she sees as part of her families inheritance. The only problem is that Robin Carnahan is now behind her Republican opponent, Roy Blunt by 6 percentage points. On top of that in the last quarter Carnahan’s financial reports indicate that she has been having a tough time getting financial support.

Having seen the Show Me State’s state of political affairs, The Keystone State offers an even sadder situation for Democrats as now incumbent Democrat Arlen Specter finds himself in a primary against Democrat Congressman Joe Sestak. That will be a race that simply saps out whatever life is left in Arlen’s senate career and make it harder to overcome the 14% that a new poll has him trailing the Republican opponent, Pat Toomey, by.

A bit further East of Pennsylvania and Democrats are even finding the friendly liberal environment of the Empire State to be a challenge. Here, Kirsten Gillibrand finds herself having a tough time keeping Hillary Clinton’s old senate seat as former Tennessee Congressman, Democrat Harold Ford, Jr. starts beating up on her before he even officially challenges her in a race for the Democrat nomination.

In a number of polls, Gillibrand already trails former Republican Governor George Pataki, if he enters the race. Whether he runs or not is still highly doubtful. But with Gillibrand viewed highly favorable by a mere 9% of New Yorkers and unfavorably by 17%, finding a decent Republican who can possibly take this should not be hard………“should not be”, but probably will.   At the very least, a good candidate will force Democrats to pump money into a seat that the DNSC would rather invest elsewhere.

These are just some of the latest developments that only add to the likely Republican takeover of seats in Arkansas, Illinois and North Dakota. But if none of that worries Democrats yet, one thing that should is a very common denominator. All of these candidates, not to mention Arkansas, Illinois and North Dakota as well, have the Democrat incumbents and the likely Democrats nominees approval ratings that are below 50%. Historically, at this stage of game, just a mere nine or so months away, any incumbent who is preferred by less than half of their constituents, is in trouble.

That in and of itself means big trouble for most Democrats and although things could change, it is getting a little late in the game to turn things around.