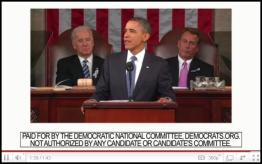 In what can only be viewed as a sign of things to come, the Democratic National Committee is returning to their attempts at demonizing Republicans by trying to paint their conservative base as heartless fiends and maniacal evil scientists who would dare to experiment with such things as the ability for the free market to improve quality and life in America. In a video put out this week by the DNC, clips from CPAC, the American Conservative Union’s annual Conservative Political Action Conference.

The video uses clips of cheering CPAC audiences as speakers talk of replacing the E.P.A, abolishing the Board of Education and allowing people to opt out of Social Security. After the evil Republicans have their say, Steny Hoyer and Debbie Wasserman-Schultz are spliced in as they discuss how Democrats are making sure that America is competitive enough to insure is a stronger economic future. The video then goes to a clip of President Obama from his State of the Union Address in which he discusses the entrepreneurial spirit of Americans and how as a nation “we do big things.”

What the ad does not tell you is that for Democrats, those big things are big government and big government programs which replace the American entrepreneurial spirit with bureaucratic mandates and regulations that have a return on the dollar that is less than the cost required to implement.

Another interesting thing to point out is that, the way I see it, the DNC seems to also be banking on President Obama’s supposed great oratory skills as means to appeal to the hearts and minds of the American voter. Not that there is anything wrong with that. A President should be able to do so, but one must be able to tap into American sentiments if they wish to be successful at such attempts. One must be Reaganesque if they wish to do that. The problem is we knew Ronald Reagan and Barack Obama is no Ronald Reagan. Nice try though.