TABLOID TERRORISM AND THE OBAMA SUPPORTERS BEHIND IT 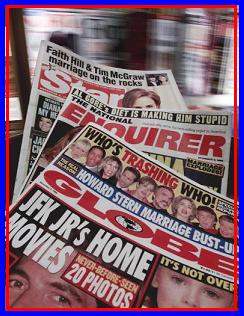 I have struggled with whether or not I should give attention to a little listened to, low rated, struggling propaganda filled, left wing, smear mongering, radio station called Air America. I was torn. Do I give them attention or do I let them fade into the air on their own. I decided that keeping them a secret is not the right course to go. I determined that the best course of action is to shed light on their campaign of disinformation, distortion and despicable conduct. I felt that the secret of their existence should be exposed because it will help to establish the truth.

Air America is a small radio network that is propped up by liberal activists like Al Gore and George Soros. Their reason for being is to extol the virtues of liberalism and to promote the candidacies of any and all liberals. From comedian and Minnesota Democrat U.S. Senate nominee Al Franken, to liberal presidential nominee Barack Obama, Air America is vigilant in their pursuit to get them elected to office.

In doing so they rarely promote the candidates of their choice by putting forth their plans or policies. Instead they focus on Republicans . They go off the script of rational debate and enter into a National Enquirer mode and post and air headline grabbers smearing Republicans. Headlines like “Sarah Palin is Spiro Agnew in Drag” or “ Sarah Palin Wanted To Ban Books From The Library”

Air America ignores any sense of decency or truth and runs with made up scandals and word of rumors that are outrageous and despicable.

Recently they went with a fairytale claiming that Track Palin, the son of vice presidential nominee and Alaska Governor Sarah Palin, is a racist.

According to Air America

“Sarah’s son Track is a serious Nazi sympathizer but he joined the white power movement rather recently. His story is not yet told. He was overheard talking about Mexicans in a derogatory way to other members of his unit. They were engaged in a conversation about immigration and it turned racial. Someone mentioned that John McCain while at the US Naval Academy harassed on a daily basis the first Mexican American cadet in Naval academy history. This caused Track Palin to say that he didn’t believe Mexicans should be allowed into our country and he did not understand that this Guy was an American of Mexican heritage“
Now how this can be passed on as news is beyond me. The story is devoid of any evidence and any reliable sources. It is only story on Air America. Not even the liberal icons of biased news on MSNBC have lowered themselves to this degree of trying to falsify truth and portray a smear like this as news or being newsworthy.

Yet Air America, in panic and desperation chooses to run with stories such as that one and more. At late they have been particularly dealing, on a relentless front, with Sarah Palin. Her popularity and the energy that her entry in this election has injected, petrifies liberals who thought that only their messiah, Barack “America” could attract praise and bring a fresh new face on the scene.

They believe that putting something in writing or allowing it to go out on the airwaves makes it believable or even true. Well in light of that thinking I am suggesting that those who do not believe in the Air America approach to debate, actually engage in that approach. Help the liberal, media, gossip mongers to understand what reckless abandonment brings to the table. Create for Air America, and their supporters, the same kind of atmosphere that they have created. Establish an environment in which they must defend against distortion and lies.

Do so by cutting the following excerpt and pasting it anywhere and everywhere that you can.

“There are claims that Democrat Barack Obama was spotted conducting extramarital, sexual activity with male Chicago gang lords in a back alley before he announced his race for President. Additional details indicate that Senator Obama later went home and bitch-slapped his wife Michelle before having a homosexual menage-a-tois with another Chicago gang lord and Obama financial backer, convicted Chicago slum lord, Tony Rezko. On top of that, in return for the sexual favor, Mr. Rezko made an unrecorded donation of $2,500 dollars to the Obama for President effort. All of which was conducted in front of Obama’s religious mentor Rev. Wright, who was there to fulfill a deviant sexual fetish by watching.”
Is any of this true, I don’t know? But by the standards that Air America uses to post and air their own disgusting lies and smears, it is worthy of reproduction. Now you may find that excerpt offensive and you may be angry at me for even suggesting it. Maybe even as angry as I am of the devoid of fact, liberal establishment that is the impetus behind such smut merchants as the Daily KOO’s or Air America in regards to someone simply because they are Republican.

I am willing to deal with distortions or even lies about a candidates record. I am willing to argue over the interpretation of a candidates statement or their policies but I am not willing to tolerate or accept fictional creations as a basis for determining who the next President of our nation should be.

Liberals and defenders of these tactics may claim that Air America is only countering the preponderance of conservative radio talk shows. The problem there is the fact that these talk shows do not fabricate headlines. They discuss them, granted they do so with the ideological slant that they come from, but it is about the truth, not fictional distortions.

I do not want to become a tabloid terrorist like Air America. I want to be able to stay on topic and make a difference in the real world. That can only be done by dealing with reality and true facts and that I will do. I believe that to solve our economic woes we need to know the real reasons that led to them. To fight terrorism we need to know the true facts involving terrorist and their activity. By liberals pumping out headlines like “Bush Lied, People Died”, no cause is advanced or problem is solved. Nothing is accomplished by running with lies that state Sarah Palin pretended to give birth to a child 5 months ago but it was actually her daughters child, . I don’t want to engage in a debate about fairy tales. Fairy tales end however the storyteller wants them to but truth is a result only reached by the telling of facts.

So I will continue to offer my opinions based upon truth and the facts but in the mean time I also offer you the opportunity to cut and paste in participation with the Air America tactics that liberals base their debate on.