MIRACLE ON THE HUDSON?

POLITICS 24/7  is not in the habit of dealing with events outside of politics but as most of us know there are many things more important than politics.

This afternoon, one such event occurred in New York’s Hudson River.

Three minutes after taking off from New York’s LaGuardia Airport  in  Queens U.S. Airways Flight 1549  lost power probably due to a number of Canadian geese getting sucked into one or more of its engines. Within a split second the Captain of the plane tried to head for New Jersey but it was obvious to him that the aircraft could not make it.

The plane was losing power and altitude, The lives of 5 crew members and approximately 150 passengers hung in the balance as the plane hung over the densely populated New York city metropolitan area.

Almost immediately Captain Chesley Sullenberger decided to use the Hudson River as his landing strip.

The quick decision proved to be the best possible one.

Without risking the lives of any citizens below his craft, Captain Sullenberger tried to save the lives of the more than 150 people in his care and in what officials and experienced aviators can only describe as the type of picture perfect landing that one hopes for under the best of condition, Sullenberger glided the powerless aircraft down towards the Hudson’s icy waters and skimmed its surface until the plane came to a sudden stop, in one piece and floating.

The impact was still terrifically rough but it could have been much rougher had the angle of descent been slightly off.

Had the plane not hit the surface of the water properly, it could have easily been torn apart. Had it hit the river surface in any way less then perfect, its cargo hold doors and landing gear bays could have been comprised and allowed water to quickly rush into the plane and cause it to sink much quicker than it did, thereby subjecting passengers to subfreezing water and limiting their chances for rapid rescue.

What Captain Sullenberger did, did not involve luck. It took experience, commitment, judgment, confidence, talent, bravery, nerves of steel and presence of mind. A lesser person could have panicked. They could have frozen and allowed gravity to bring the plane down upon crowded neighborhoods as children made their way home from school.

Had Captain Sullenberger not been the man that he is, many more than the over 150 passengers on flight 1549 could have died. Hundreds more could have perished.

Of course the flight crew of flight 1549 were not alone in their heroism.

New York has dealt with calamity on a scale that few other cities have ever seen. As a result New york city is prepared for challenging, unexpected events and so the city’s emergency service workers ran into action before the plane hit the water. Alerted to the emergency when the plane first lost power, police, firemen, paramedics were in the ready and hospitals on both sides of the Hudson were put on alert. Ambulances rushed to the shores alongside of the planes resting place. Ferry boats darted toward the floating aircraft and as they floated along side the slowly sinking plane, passengers boarded the boats and were whisked to safety.

All of those involved are heroes but today our hats go off to captain Chesley Sullenberger.  Even before finally exiting the plane hinmself, whith the frigid water rising around him, Sullenberger went up and down the jet’s aisle to make sure that no one was still aboard.

Had it not been for him, the new year would not be getting out of its first 15 days without a tragic and dramatic loss of many lives.

New York’s Governor David Paterson called the event a “miracle on the Hudson”. I say the miracle is named Chesley Sullenberger and tonight there are many people thanking God for the miracle that Sullenberger performed.

Click here to view today’s top story on POLITICS 24/7 and join the debate to pick the next chairman of the Republican National Committee.  Find out how to submit yor question to the candidates in a debate sponsored by Rebuild The Party and YouTube.    And take the poll on who you think should be the next RNC Chairman.

It would seem that Jon Corzine’s recent State of the State address successfully brought New Jerseyans together. 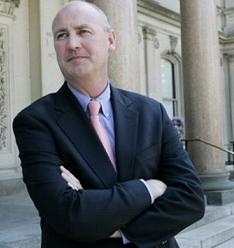 Together the editorial boards of nearly all the newspapers in New Jersey have concluded that Jon Corzine is a failure and the voters of New Jersey are debating whether or not Corzine’s job performance rates worse than one term Governor Jim Florio.

The disastrous results produced by Corzine’s last three years in office were punctuated by his utterly empty State of the State address. It was an  address that had many words but little meaning.

Like a shark smelling blood in the water, New Jersey State Republican Chairman Tom Wilson sent out a message to voters.

It reads as follows:

“Tuesday, Governor Corzine gave his state of the state address and proved he still doesn’t get it. He’s still trying to spend his way out of every problem. Corzine doesn’t get that government spending IS the problem!  Read the Editorials published about the speech.

When even the liberal editorial writers are saying it, you know it’s time for a change!

Republicans are poised for a major win this November. Late last week, a new public poll revealed that no one has ever sought re-election to the Governor’s office with worse public approval ratings than Jon Corzine. Voters actually think Corzine is doing a worse job than Jim Florio – the last one term Governor who got thrown out for abusing the taxpayers!
I’m working with our legislative and party leaders throughout the state to develop and deploy a grassroots plan to harness the winds of change that are blowing through Trenton. We’re going to launch the most comprehensive, coordinated, and technologically efficient effort to engage the over-taxed people of New Jersey in a campaign for real change. Our plan will help candidates from the local to the state level reach out to the right voters and deliver our collective message of lower taxes, less spending, and new leadership. We’re finalizing our plans now and expect to launch it by mid-February. So stay tuned!
I hope we can count on you to be part of that effort and that is why I am calling on you to make an IMMEDIATE online contribution of 25, $50, $100, $500 or $1,000 today to help make certain we meet this all-important goal.
Together we can change New Jersey by reigning in government and provide real reform and real relief. But politics is a team sport and everyone on the team has to help if the team is going to win.
Will you make a special online contribution to our New Jersey Republican State Committee today? The Democrats have raised our property taxes, income taxes, sales tax and, literally, 100 other taxes. We’ve got to stop them before they bankrupt New Jersey.
Together we can end their reign of error.
Tom Wilson”
———————–
The Chairman is right. The people of New Jersey are over-taxed and the state is on the wrong path. Tom Wilson is also right to take advantage of the opportunity that Corzine and the Democrat led legislature have given us. People need to know that their will be an alternative to the continuation of the corrosive Corzine administration and the work leading up to providing people with that alternative begins today.

Jon Corzine simply helped speeding up that process with his sad state of the state message.

Click here to view today’s top story on POLITICS 24/7 and join the debate to pick the next chairman of the Republican National Committee.  Find out how to submit yor question to the candidates in a debate sponsored by Rebuild The Party and YouTube.    And take the poll on who you think should be the next RNC Chairman.

ASK THE CANDIDATES FOR REPUBLICAN NATIONAL COMMITTEE CHAIRMAN A QUESTION

Very soon, state Republican leaders will be electing a national chairman for the party.

The next leader of the G.O.P. will be facing a daunting task. They will be shepherding a party that has been losing power since 2006 when we lost control of the house of representatives and the senate.

This past election saw us not only fall deeper into minority status in both chambers of Congress, but we lost the last piece of power in federal government that we had since 2006,…the presidency.

There are many things that need to be done to put Republicans back on track and although I contend that much of our success depends on the Republicans we elected to serve and how well they do their legislative jobs, forward momentum can be created with the right person leading the political aspect of the party.

The race is pretty intense so far and all of the candidates are working hard to sway enough votes in their favor to become the next national committee chairman. In fact many of them have been active on a grassroots Republican site called Rebuild The Party.

Rebuildtheparty.com has been discussing how to do just as its name suggest….rebuild the party. And they do so with us, the voters and activists who are angry at both the way our party has been handling itself and the direction that Washington, D.C. is taking us in.

Now in a joint venture with YouTube, Rebuild The Party is holding their own open debate for the potential RNC Chairmen.

In addition to those 10 questions, the candidates may answer any other questions that they would like but the 10 questions with the most votes are musts.

Here in New Jersey, our state party leaders have already declared their support for Michigan’s Republican State Chairman, Saul Anuzis but do you have a question that might just bring forth an answer from the candidates that could change their minds?

For Republicans, the election of our next national chairman is probably the single most important decision we can make until the presidential election of 2012. It is a decision that can either help us elect a Republican President in 2012 or drastically impede our chances of doing so.

So now is your chance. If you have strong sentiments about the direction that you think our party needs to go in, now is the time to ask the people who want the responsibility to lead us, if they intend to go in that direction.

To be a part of the debate you have to first sign in to Rebuild the Party at  http://www.rebuildtheparty.com/

Then you can go to  http://forum.rebuildtheparty.com/

There you will find the place to submit your question and more details.

The election for Republican National committee Chairman is January 30th so get to work today and help make tomorrow better than yesterday. Ask your question and shape events instead of just watching events.

Until then, take the poll and let us know wo you want o see become RNC Chairman:

WHY RONALD REAGAN MADE SUCH A GREAT PRESIDENT