Tribute To Communism On South Lawn of the White House

Stop the presses, hold your horses and keep your pants on. 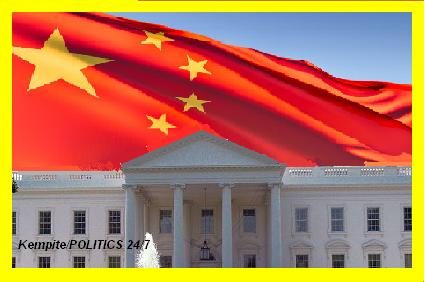 the White House in Washington, D.C..

According to Chen Ronghua, the chairman of the Fujian Association of the United States,  his group has applied for permission to hold a tribute to the establishment of the PRC and to raise the Chinese flag, all on the South Lawn. Ronghua adds that the application was approved and he claims it was approved because of what he calls  “sound Sino-US relations” and because China is a responsible country.

Not only do I question celebrating 60 years of hardcore communism, I also have to question the judgment of the White House. This raising of the communist flag of China at the White House will be the first time a foreign nation’s flag will be hoisted to commemorate a country’s founding,

Although there is no violation of the U.S. flag code here, there is an ethical and moral violation. Do we really want to celebrate communism? And do we really want the Chinese flag raised on the South Lawn of the White House for such a celebration?

Respect dictates that we do present the flags of other nations at the White House during ceremonies marking the arrival of dignitaries from other countries but this is not a summit.   Chinese President Hu Jintao, or Premier Wen Jiabao are not gracing us with their presence. This is unprecedented and it is uncalled for.

Chen Ronghua says “It was always my dream to raise a Chinese flag in the center of Washington, D.C.”. Well no offense to you Chen, but it is not my dream for a Chinese flag to be raised on the lawn of the White House.  That to me is the opening scene of a bad movie. It is also not something that I think American veterans of any age or of any war would be interested in seeing.

Most, if not all the Chinese restaurants I go to don’t even hang the Chinese flag in them, yet here we are waving it on the lawn of the White House..

What message will this send?

Not only do I think it inappropriate for the White House to allow a commemorative services of the founding of the People’s Republic of China, I find it blasphemous to allow its flag to wave over the White House lawn without it being for a visit, in goodwill, from one of its leaders.

If President Obama condones and allows this, there will be no good reason to deny anyone the right to compare the President’s policies with socialism. If he allows this “celebration” and flag raising, one will seriously have to wonder where his loyalties lie.

I have never before been compelled to actually associate President Obama with anti-American sentiments. He is our President. He is our leader and I do not want to think that any leader in America is un-American but a salute to communism approved by the White House, at the White House, will not make me question this sentiment, it will begin to solidify that sentiment.

I understand that President Obama wants to show the world that we are a friendly nation. I know that President Obama hopes to spread goodwill, but between recently going out of his way to wish all Muslims a happy Ramadan on behalf of, not just himself, but all Americans, and now celebrating Chinese communism, I have to say enough is enough.

Since taking office, President Obama has stood on foreign soil and apologized for America and bowed down to Saudi kings. He has refused to acknowledge our plight against Islamic fundamentalists as a war on terror and he has downplayed our nation’s role in promoting freedom.

I am tired of being denounced for calling socialist programs, socialist programs. I am fed up with being told that I must embrace my enemy and I will be damned if I celebrate communism or allow its celebration at the White House.

This is still America!

It is time for our President to stop promoting socialism, embracing our enemies as though they were our friends and to stop celebrating communism. If this is the type of anti-American activity he wants to participate in, fine. It’s a free country.   Resign from office, go back to palling around with Bill Ayers and part hearty with Fidel, Hugo and Kim Jong Il, but do not run my country that way.

Take a stand America.  Write your letters to the editors, call into to your local radio stations and your elected representaives and let them know that you will not tolerate this.  Tell your elected officcials that you will hold them accountable.  Let them know that if they let this tribute to the communist government of China to go on without at least strong, public condemnations from them, than you will condemn them to defeat in their next election.

Don’t let the atrocious behavior of the ruling regime in  Washington go unanswered.